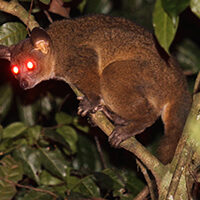 Three poorly known nocturnal mammal species from the montane forests of the Taita Hills in Kenya, were studied via vocalization analysis. Here, their acoustic behaviour is described. The studied animals were the tree hyrax (Dendrohyrax sp.), the small-eared greater galago (Otolemur garnettii), and the dwarf galago (Paragalago sp.). High-quality loud calls were analysed using RAVEN PRO, and compared to calls of presumed closest relatives. Our findings include the first detailed descriptions of tree hyrax songs. Moreover, our results suggest that the tree hyrax of Taita Hills may be a taxon new to science, as it produces a characteristic call, the ‘strangled thwack’, not previously known from other Dendrohyrax populations. Our data confirms that the small-eared greater galago subspecies living in the Taita Hills is Otolemur garnettii lasiotis. The loud calls of the elusive Taita Hills dwarf galago closely resemble those of the Kenya coast dwarf galago (Paragalago cocos). Thus, the population in the Taita Hills probably belongs to this species. The Taita Hills dwarf galagos are geographically isolated from other dwarf galago populations, and live in montane cloud forest, which is an unusual habitat for P. cocos. Intriguingly, two dwarf galago subpopulations living in separate forest patches in the Taita Hills, Ngangao and Mbololo, have clearly different contact calls. The Paragalagos in Mbololo Forest may represent a population of P. cocos with a derived call repertoire, or, alternatively, they may actually be mountain dwarf galagos (P. orinus). Hence, differences in habitat, behaviour, and contact call structure suggest that there may be two different Paragalago species in the montane forests of Taita Hills.