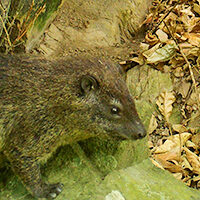 The calls of tree hyraxes have been used to help define a newly recognised species (the Benin tree hyrax, Dendrohyrax interfluvialis) living in West Africa between the Niger and Volta rivers (Oates et al. 2021). We compared the calls of hyraxes from this region with those of the six most commonly recognised subspecies of western tree hyrax, Dendrohyrax dorsalis occurring across the Guineo-Congolian rain forest from Sierra Leone to Uganda. Whereas the calls of each subspecies had a consistent structure, the calls of the interfluvial population were strikingly different (listen below). We then compared details of skull morphology between populations, and analysed samples of mtDNA; these data confirmed the existence of two distinct species. Note that only one call type is known for each of these species (klaxon calls in D. dorsalis vs. rattles and barks in D. interfluvialis – see below) and the pattern of calling follows a species-typical pattern each time the call is made. Call variation of at least three types is also found among sampled populations of eastern tree hyraxes in the Eastern Arc Mountains, but here the situation is more complex. In Type 1 there appears to be a single call that follows the same pattern each time it is given. In Type 2 some calls follow a characteristic pattern but others do not, and in Type 3 there are several different call types that can be given alone, but they are sometimes strung together in idiosyncratic combinations that can last for several minutes. These have been described as “songs,” akin to the songs of rock hyraxes (Ref. link to Rosti et al):

Other species of hyrax in current taxonomies are the rock hyrax, Procavia capensis (>17 subspecies) and the bush hyrax, Heterohyrax brucei (>20 subspecies). These too exhibit regional variation in their patterns of calling but we do not yet have a sufficient range of recordings to make comparisons. It appears that, unlike tree hyraxes that call mostly at night, rock hyraxes call mostly during the day while bush hyraxes can be heard by day and by night (cathemeral). Click here to listen to additional recordings of the various hyrax taxa, additional photographs can be found on our Hyrax Photographic Map