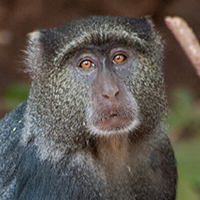 The Manyara Monkey occurs from the Ngorongoro Conservation Area in the northwest, southwards through Lake Manyara National Park (including Marang Forest) to the Nou Catchment Forest Reserve and Ufiome Forest Reserve. The geographic range is at least 1,500 km² but may be as large as 5,900 km². The Manyara Monkey occupies various types of forest from 960 m above sea level to at least 2,550 m asl, but likely reaches the highest forest of the Ngorongoro Conservation Area at 3,260 m asl.

Cercopithecus mitis is well-known for the Lake Manyara-Ngorongoro Region, a region much visited by tourists. Until now, however, this population was referred to as a “hybrid swarm” comprised of Stuhlmann’s Blue Monkey C. m. stuhlmanni, Zanzibar Sykes’s Monkey C. m. albogularis, and their descendents. The authors, however, found no evidence for a hybrid swarm. The Manyara Monkey is geographically isolated, phenotypically distinct, and presents little intra-population variation.

Butynski and De Jong put forth two hypotheses for the origin of the Manyara Monkey. Hypothesis I: It represents a now isolated section of a phenotypic cline that once extended across the Eastern Rift Valley. Hypothesis II: It is a close relative of the Mweru Monkey C. m. opisthostictus and, thereby, is a relic of dispersal from the Congo Basin/Upper Zambezi Basin to the Lake Manyara-Ngorongoro Region. To unravel the complex evolutionary history of C. mitis, and to stabilize it taxonomy, molecular research and additional biogeographic research are required.

The future of the Manyara Monkey is uncertain due to threats associated with the region’s rapidly increasing human population (e.g., expanding agriculture, settlements, roads, mining, collection of fuelwood, unsustainable grazing and browsing by livestock). De Jong and Butynski, who assessed the Manyara Monkey for the  IUCN Red List of Threatened Species 2020, concluded that this taxon is ‘Endangered’ despite the fact that about 60% (c. 3,500 km²) of the probable geographic distribution lies within six protected areas. Conservation priorities for the Manyara Monkey are (1) improve management of the six protected areas in which it occurs, and (2) restore and protect the wildlife corridors of the Lake Manyara-Ngorongoro Region. Tanzania is one of the most important countries in Africa for primate conservation given its 44 primate taxa, 13 endemic primate taxa,  and 21 globally threatened primate taxa. Tanzania is, however, losing about 200 km2 of forest each year (at 1.1%, the second highest annual rate of forest loss in sub-Saharan Africa) and has a 3% human population ‘Rate of Natural Increase’ (compared to 1% worldwide). It is, therefore,  inevitable that Tanzania will continue to lose large areas of forest and large numbers of forest-dependent primates.

The full article can be accessed here. Additional images of the Manyara Monkey can be viewed on our ‘Gentle Monkey Photographic Map’: http://www.wildsolutions.nl/photomaps/mitis/