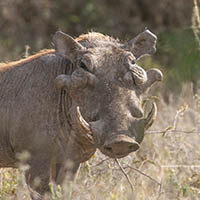 ABSTRACT:Two species of warthog are currently widely recognised, the poorly known desert warthog Phacochoerus aethiopicus and the widely distributed common warthog Phacochoerus africanus. Spatial data for both species were collected during field surveys and from the literature, museums, colleagues, naturalists, local experts, and online resources to assess their biogeography in the Horn of Africa (HoA). Their distributions were overlaid with ArcGIS datasets for altitude, rainfall, temperature, and ecoregions. Phacochoerus aethiopicus appears to be restricted to Ethiopia, Kenya, and Somalia, with no records west of the Eastern Rift Valley (ERV). The estimated current geographic distribution of P. aethiopicus is 1,109,000 km2. Phacochoerus africanus occurs in all five countries of the HoA and has an estimated current geographic distribution in the HoA of 1,213,000 km2. Phacochoerus africanus appears to be the more adaptable species although P. aethiopicus is able to live where mean annual rainfall is more variable. Although both species are allopatric over vast regions, they are sympatric in central east Ethiopia, north Somalia, central Kenya, north coast of Kenya, and southeast Kenya. Both suids remain locally common, their populations are, however, in decline due to the negative impacts on the environment by the rapidly growing human populations in all five countries.

Table. Summary of human population density, rate of natural increase, and growth in the five countries of the Horn of Africa.