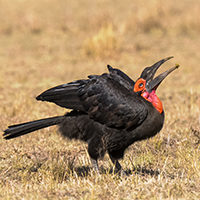 Laikipia County (ca. 9,700 km²), central Kenya, comprises a highly diverse landscape of grassland, bushland, woodland, dry forest, moist forest, riverine forest, wetland, and farmland. Mean annual rainfall ranges from 40 cm in the north to 120 cm in the southeast and southwest. Although mean annual rainfall is >80 cm in the southeast and southwest, about 75% of Laikipia County (hereafter, ‘Laikipia’) is semi-arid. The altitudinal range is 1,260–2,400 m above sea level. In 2013, there were about 43 people/km² and the total population was about 400,000 people. Much of Laikipia’s natural habitat has been degraded, fragmented, or lost as a result of over-grazing and over-browsing by livestock, cutting of trees, conversion to farmland, and over-harvesting of water. Detailed descriptions of the environments of Laikipia, and the threats to these environments, are presented in Georgiadis (2011) and Butynski and De Jong (2014, 2015). In the case of vultures, feeding on poisoned mammal carcasses has probably been the main cause of declines and extirpations (Ogada et al. 2016). Special reference is give here to Lolldaiga Hills Ranch (200 km²) in east Laikipia.

Here we list some of the resident species of large bird (i.e., Black-bellied Bustard Lissotis melanogaster and larger) that have (1) either been extirpated from Laikipia or (2) are known to be, or appear to be, in decline in Laikipia and/or are rare in Laikipia. Except for the extirpated species, this list is not meant to be complete. Not included here are birds that are migrants, vagrants, and/or ‘naturally rare’ because Laikipia is extralimital (e.g., Black Heron Egretta ardesiaca, African Swallow-tailed Kite Chelictinia riocourii, White-winged Black Tern Chlidonias leucopterus). The taxonomy and order of listing applied here for bird species is that of the East African Natural History Society (Bird Committee 2009). In the below list, the current IUCN Red List global ‘degree of threat’ status (IUCN 2018) is presented in parentheses after the Latin name.

TMB has lived and undertaken research in Laikipia for 18 years, and YDJ for 12 years. The information presented here is based upon their own observations, on a search of the literature, and on communications with naturalists, researchers, and ranchers.

This is the first in a series of notes that will appear in this newsletter on Laikipia’s extirpated, most threatened, and rarest birds and mammals. White-headed Vulture Trigonoceps occipitalis (Critically Endangered): One on Sosian Ranch in 2007 (Steve Carey, pers. comm.) and one on El Karama Ranch in 2014 (Lavinia Grant, pers. comm.). These are the last known records for Laikipia. Extirpated, although vagrants expected. The species listed here are uncommon or rare in Laikipia and their numbers are believed to be in decline (T. Butynski & Y. de Jong, pers. obs.). Here, ‘uncommon’ is defined as unlikely to be encountered in a day of birding in Laikipia except, perhaps, at a few sites. ‘Rare’ is defined as unlikely to be encountered during a week of birding in Laikipia, being absent from very large areas and nowhere common. All of these species require more study to determine their distribution, abundance, threats, and conservation status in Laikipia.

Ostrich Struthio camelus (Least Concern): Two subspecies (considered full species by IUCN and others) occur in Laikipia; Common Ostrich S. c. massaicus (Least Concern) and Somali Ostrich S. c. molybdophanes (Vulnerable). As far as we are aware, no baseline exists against which to assess change in population size, but both appear to be in decline. It is important to maintain both taxa in Laikipia as this may be their only remaining area of sympatry. Uncommon. Secretarybird Sagittarius serpentarius (Vulnerable): At least three breeding pairs on Lolldaiga Hills Ranch but absent from much of Laikipia. Uncommon. Hooded Vulture Necrosyrtes monachus (Critically Endangered): Up to four birds at large carcasses on Lolldaiga Hills Ranch. Readily observed at Mount Kenya Safari Club where up to 18 birds roost in the river valley (Peter Hetz, pers. comm.) Not known to breed in Laikipia at this time. Uncommon. Lappet-faced Vulture Torgos tracheliotos
(Endangered): Up to four birds at large carcasses on Lolldaiga Hills Ranch and Borana Ranch. Not known to breed in Laikipia at this time. Uncommon. Hartlaub’s Bustard Lissotis hartlaubii (Least Concern): Only one record for Lolldaiga Hills Ranch since 2012. Two on Mpala Ranch and one on Jessel Ranch in August 2006 (Bradley Bergstrom, pers. comm.). Perhaps Laikipia is too high (Lewis & Pomeroy 1989) for this bustard to be common. Rare.

Here is a comment on this species by Don Turner (pers. comm.), “Hartlaub’s is commonly mistaken for the Black-bellied Bustard, with positive identification often only possible when males are observed at close range. Like Black-bellied it too is subject to local movements, and as many areas dry out following long, protracted dry periods, Black-bellied will generally withdraw to moister riparian grasslands, only to be replaced in the dry and often over-grazed areas by Hartlaub’s, until the onset of good rains when Black-bellied will return to breed in the freshly greened grasslands, with Hartlaub’s then retreating to drier areas. In Meru NP once the rains start, Black-bellied becomes much more numerous as Hartlaub’s retreats to the dry areas of the park, then as the greener grasslands (closer to the main gate) dry out, numbers of Black-bellied decreases and numbers of Hartlaub’s increases. This may well happen at Lolldaiga.”