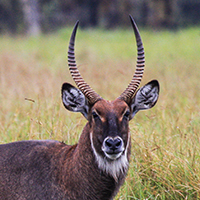 Waterbuck Kobus ellipsiprymnus, one of biggest antelopes on Lolldaiga Hills Ranch (Laikipia County, central Kenya), are found throughout the Ranch but prefer the higher grasslands and vegetation along the streams and dams of central and south Lolldaiga. Waterbucks are, as their name indicates, highly water-depended. They are limited in their ability to conserve water and are unable to endure dry periods in hot environments. The two (sub)species of Waterbuck are similar in appearance. The main distinguishing character in the field is the colour pattern on the rump; Common Waterbuck have a distinct white ellipse (or crescent) around the rump, whereas Defassa Waterbuck have a wholly white (or whitish) rump. Here we use the rump as the primary phenotypic indicator to distinguish the two taxa. During a primate and warthog survey in 2016 in north and east Laikipia County, west Isiolo County, and south Samburu County, locality information and photographs were obtained of all Waterbuck herds encountered. To better understand the geographic limits of Defassa Waterbuck and Common Waterbuck, the photographs (together with photographs obtained during several previous surveys), were geotagged and published on a Photographic Map (available at: http://www.wildsolutions.nl/photomaps/kobus/).

During these surveys, only Defassa Waterbuck were encountered in Laikipia. Previous records of Waterbuck in Laikipia, as well as records on iNaturalist.com (11 records as of June 2017), are all of Defassa Waterbuck. It appears that Common Waterbuck are absent from Laikipia County.  We did not, however, encounter Waterbuck in extreme northeast Laikipia (Lekurruki Conservancy and Il’Ngwesi Conservancy) just south of Samburu National Reserve, which is that part of Laikipia where we most expect to find Common Waterbuck. Our preliminary findings indicate that the zone for intermediate-patterned Defassa Waterbuck and Common Waterbuck in central Kenya is, indeed, narrow and lies in south Samburu County, probably extending southward across the North Ewaso Nyiro River into west Isiolo County and, perhaps, into extreme north and/or northeast Laikipia County and the Nyambeni Range.

If you have photographs of Waterbuck from these regions, please share them with us. Photographs can be sent to Yvonne de Jong at:  yvonne@lolldaiga.com  Thank you!